Enjoyed that I will search out some of his stuff for sure, he quite puts me in mind of James Grant (Ex love and money vocalist) who is one of my guilty pleasures 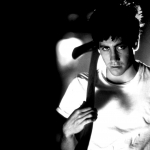 Sorry for thread drift Bencat, agreed with Andy about JG, like Colin he deserve more success for sure,
for a young kid from Glasgow's east end, his song writing talent is top notch, below is a snippet of ''you're beautiful'',
killer lyrics of the highest order.

There were times I wished you’d go to hell,
But I swear tonight I’d go to hell with you...If you wanted me to,
I thought I heard you calling, I could feel the sun again,
But now the veil has fallen, I hate you like the rain,
Take my hands, take my shoes,
All I want is a little piece of you
I believe in miracles, O my darling, you’re beautiful.
Frank...made me do it.
Top

No apologies needed I also love James Grant the ex Love Money singer have all of his CD's as far as I know and enjoy them for the very deep melancholy they seem to leak in to the room . I also love his voice .
Top

Thanks Bencat, a wee story about James Grant, his miserable persona is no different off stage.

Travelled up from Glasgow to his show in Carnegie Hall (Dunfermline), it was the time of his ''sawdust in my veins'',
as i'm no Fifer and wasn't sure where venue was, so set off from Glasgow in good time and got there early,
sunny early evening and there i was sat on a bench at side of venue,
who comes out and passed in front of me, yes the great man himself, it went like this.

me: Hi James, travelled from Glasgow to catch this show, hope the gig go well.
JG: Thanks, enjoy the show. (keeps walking, maybe he's trying to catch the off sales for his Tennants Lager)

That was it, as miserable as ever no chit chat or even an offer of a wee signed c.d.
maybe i should've told him the previous time i drove through lashing rain to catch him at Peebles,
still, i am a fan and see him often at the Celtic Connections doing work for Capercaillie and Karen Mathieson's solo work.
Frank...made me do it.
Top
Post Reply
14 posts