a couple of turntable restorations

Super job again Ant, now get yourself upstairs and get the other Lenco from the top of the wardrobe ready for your next job

Got it up and running 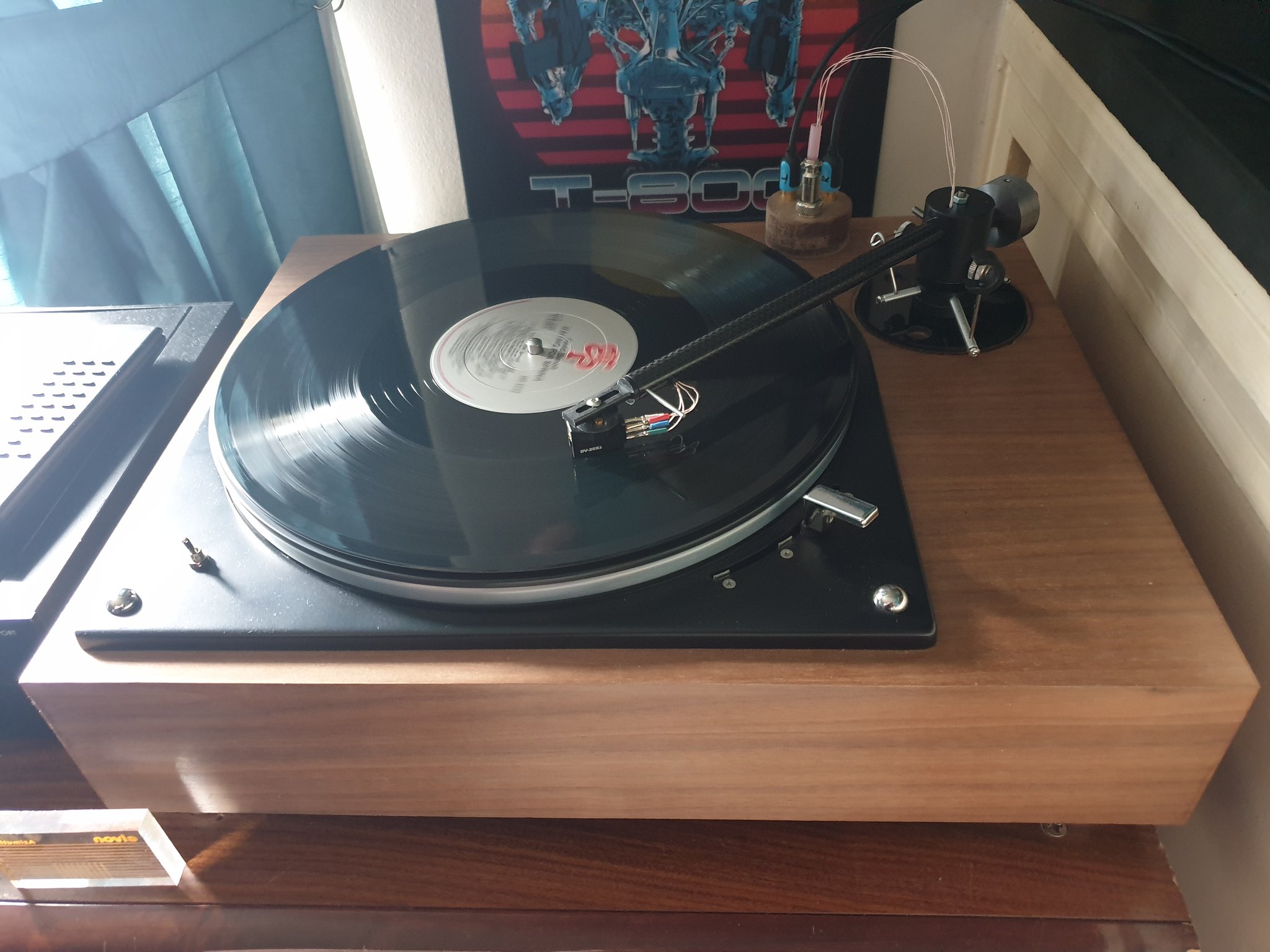 Bias guide outrigger could have done with being longer, there's not much clearance between the guide and the left hand lateral balance when the arm is in the clip.

The wiring needs some sort of little clip on the top of the bearing pin to route it through, as it is it, the hole for it to come out of the wand is about 10m forward of the pivot so it tries to push the arm over as it rotates which alters the azimuth. if its held above the bearing pin it stops it from doing it.

Setup of the cart was simple, vta was simple, these are pretty standard methods of adjustment, setting the azimuth was an arse until I realised it was the wiring that was changing it as it moved. Bias is via a 2.5g nut with some string through, I couldn't be bothered to make a weight today, and I figured the weight would want some adjustment so best to use something to get it where I wanted it and then make that weight to the eventual figure.

Ok, so with some bodges in place to fix the azimuth problem and the bias guide issue, I have a few observations of it.

This is running into pauls project phono box se which im not entirely familiar with, but is necessary because of where it has to be set up. Cart is my spare dynavector dv20x2h

The arm is very even up and down, it doesn't seem to be emphasising the top end, midrange or the bottom end, although I can hear a little bit of colouration in the mid. But this is compared with the air bearing arm which has none. At all. So wether someone else picks it up will be interesting.

It seems very clean and ordered, especially when things get complicated it seems to tease things apart. Not necessarily clinical, but heading in that direction.
Bass has some really good texture, and voices seem to be nuanced.
It seems to be tight and fast and clean.

Strangely, it seems to make the dv really quiet in the groove, pops clicks and scratches seem quieter that they do when its on the air bearing arm. Not sure why.

Handling wise, I took the lessons from the earlier iterations wrt where and how the bias guide is located to make it very stable. How it's set up means that for it to rock in either direction it has to pull the bias weight up, so when you cue it, it immediately centres itself once you let go of the fingerlift because the bias weight forces it steady, and doesnt rock at all. It doesn't do that little shimmy that other unipivots I've used do when they have a little wobble before settling down when the are cued.

So pretty natural sounding, a little bit of 'character' in the mid if im being charitable, and very stable.
I am (barely....) in the hi-fi trade
Status: Manufacturer
Company Name bte designs
Www.bte-designs.weebly.com
Top

Up to revision 7 now. Revision 6 of it was simply to have internal wiring, and use aluminium for a few bits instead of acetal, it was otherwise the same 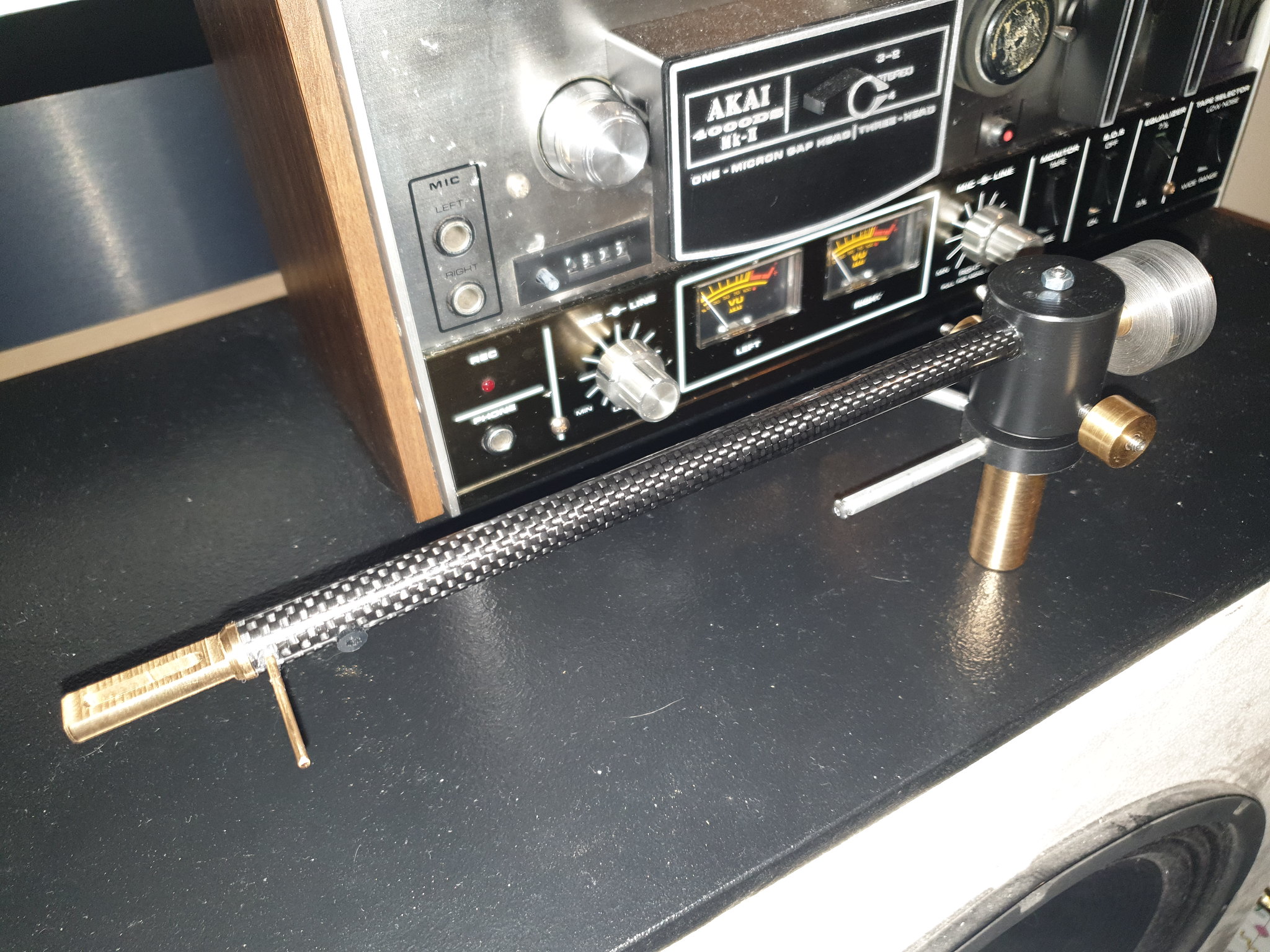 Changes for revision 7 are brass instead of aluminium for the counterweight stub and cartridge mounting, and no damping at all in the arm tube. Ive gradually reduced the damping in it with each successive iteration. good thing about starting with too much, is that you can remove it 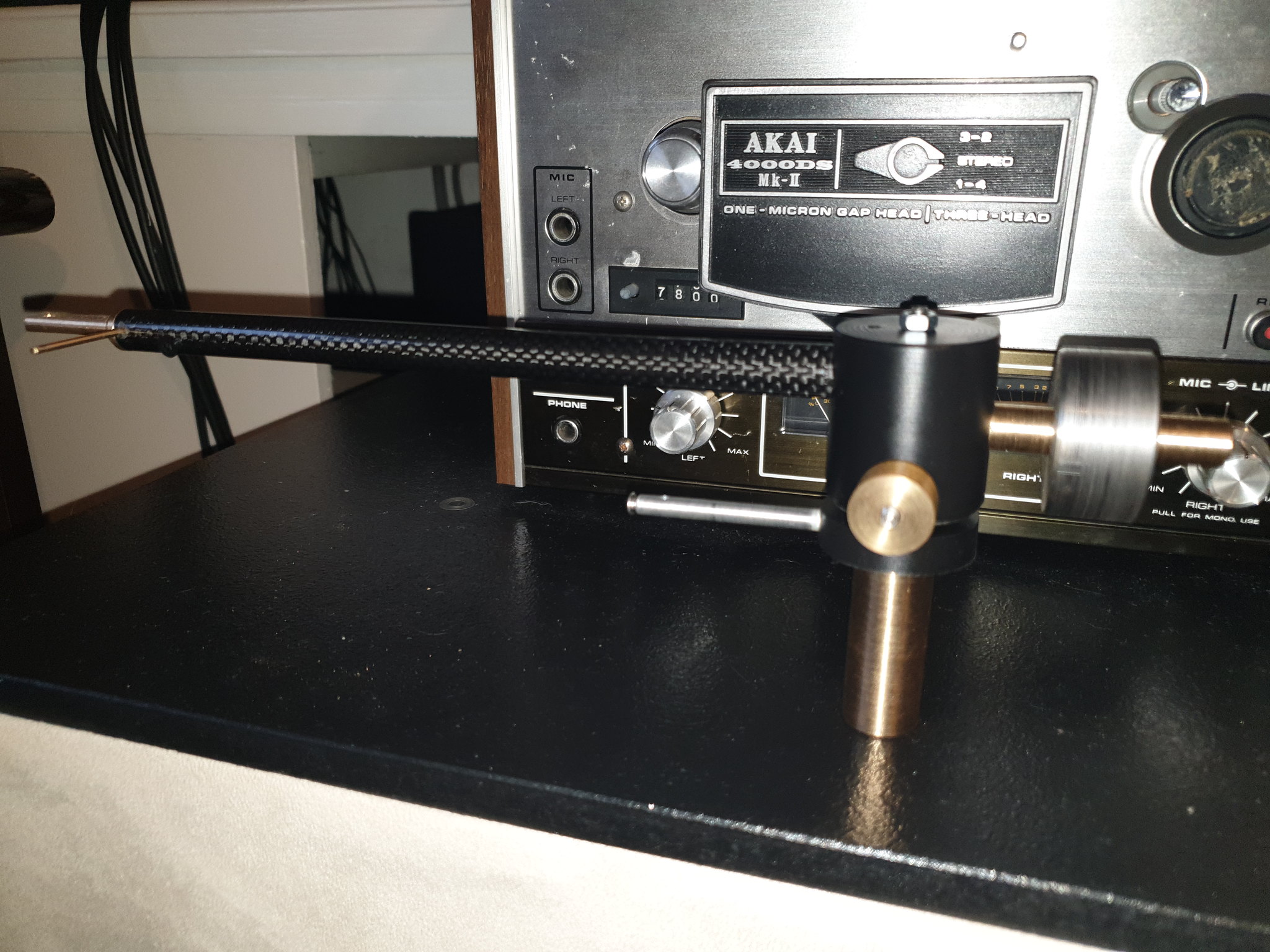 The bearing housing is the original one from the first iteration with the external wiring, so is the arm wand, the brass lateral weights are off the second iteration.
The arm pillar is brass instead of steel this time, and the outrigger assembly is also off the first one. No need to re make parts that are interchangeable. 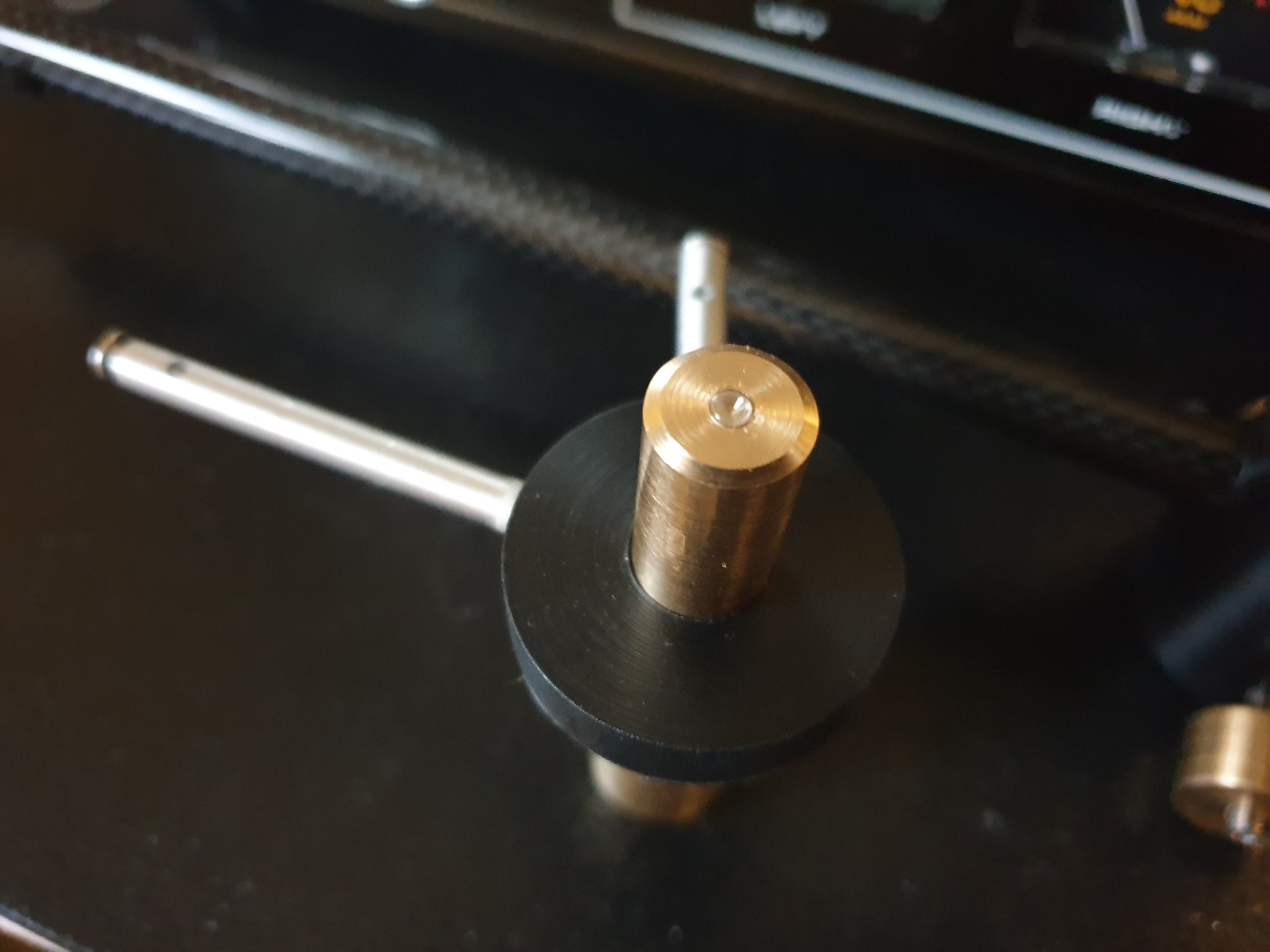 The bearing itself is abit 'better' than before too, its a little sapphire V jewel instead of being cut directly into the top of the steel pillar. There is no movement in it at all this time, the other version could be provoked into moving if you pulled on the arm wand. The pin is diamond ground to 50 degrees, I have a tool sharpener with a diamond grinding wheel which is perfect for forming the tip of the pin using a little jig I made to set the angle.

The pillar is much better than the last one, I've bored the end to 11.5mm to fit another Cardas mdin socket, had to get a little teeny boring bar to do it. Much fun was had scrounging up bits of flat stuff to shim it to the correct cutting height....... I'll get some steel and mill a shim on my new machine to the correct height for it before i next use it. Much better than drilling it to 12mm and sleeving the socket up to size. The slot for the wiring has been milled on the new machine rather than being bodged in with the old machine 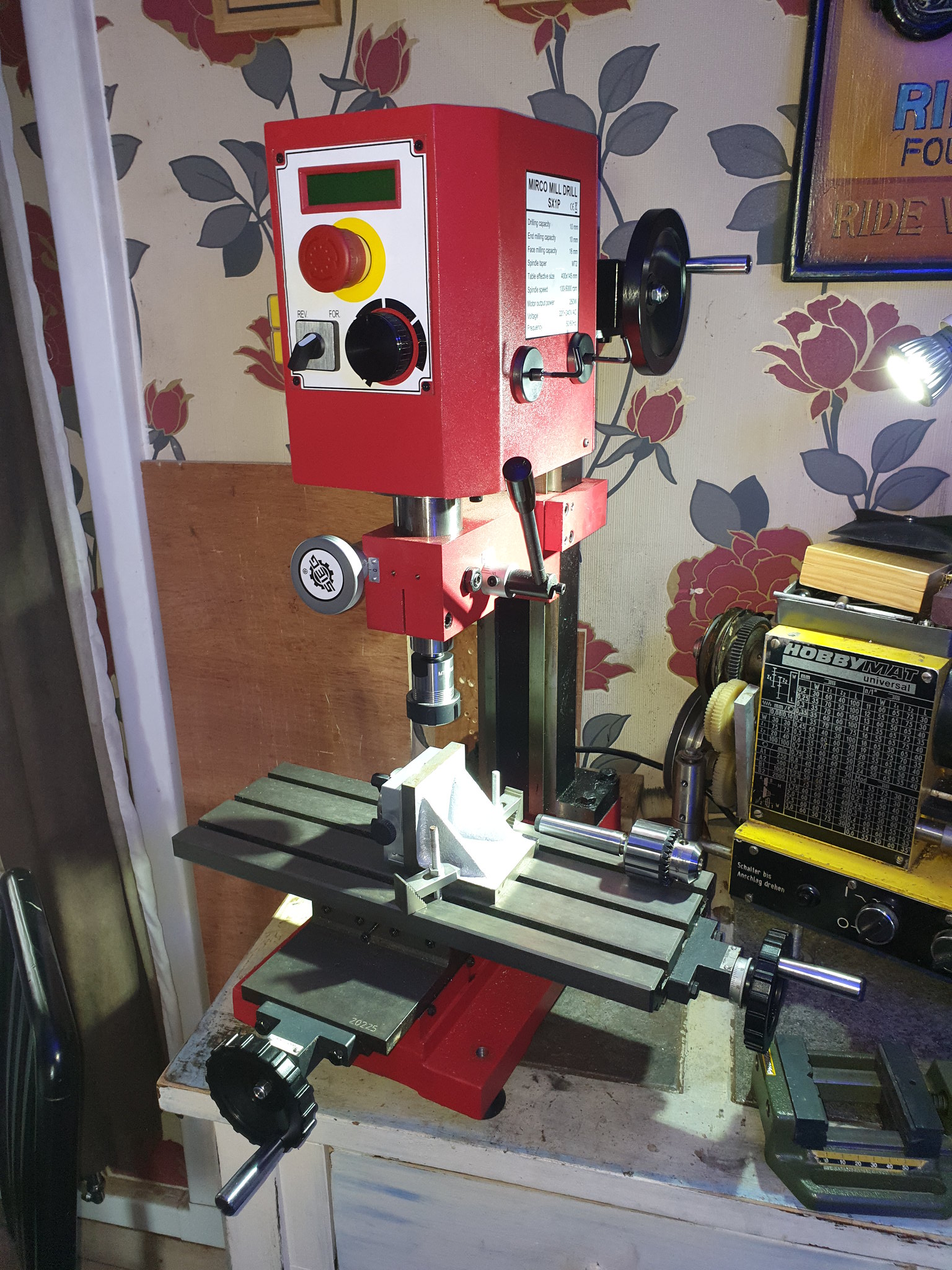 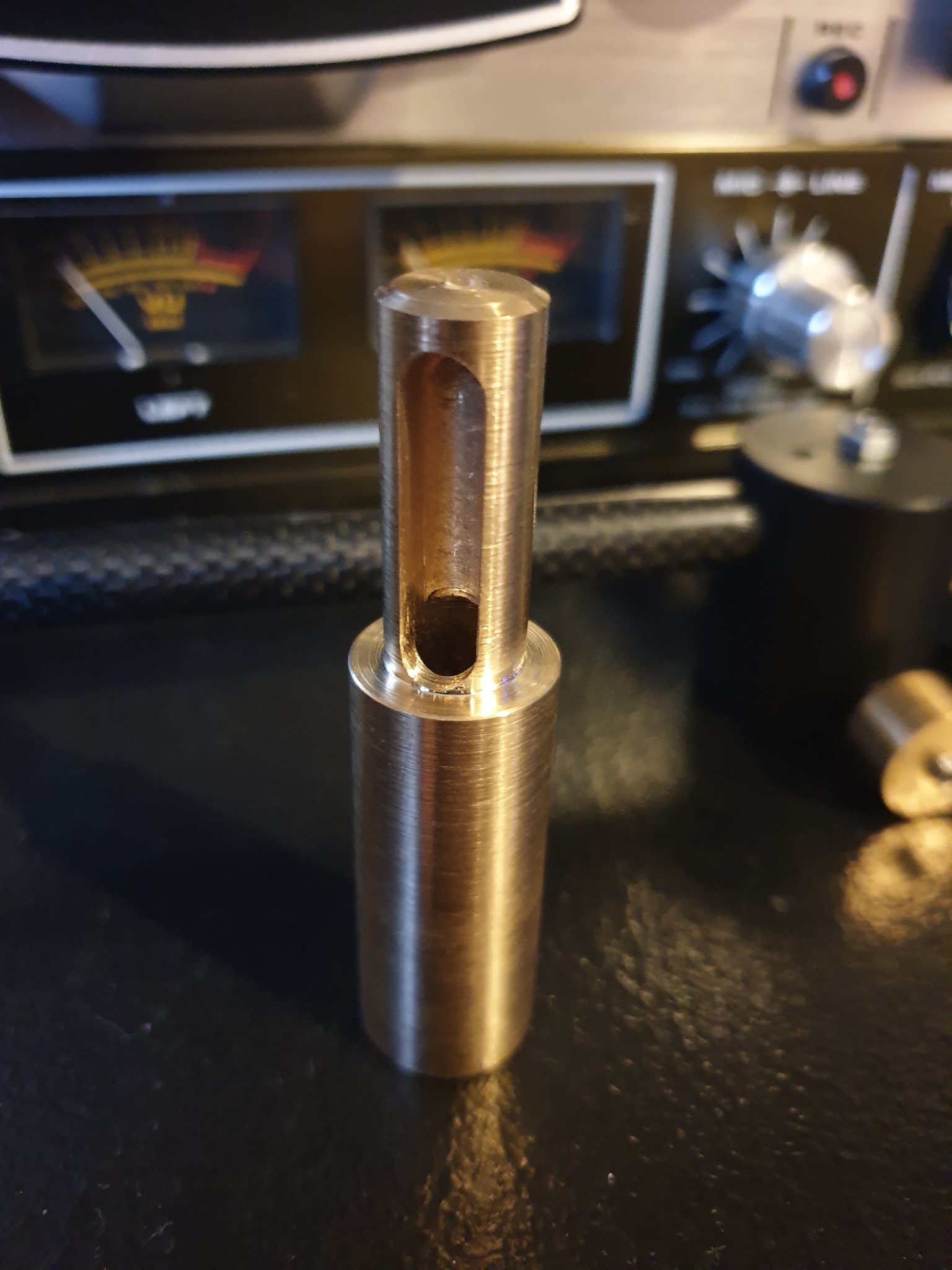 Next job is to make a better arm rest than the last one which was marginal at best.

Finished the initial build of this version, version 7 I think 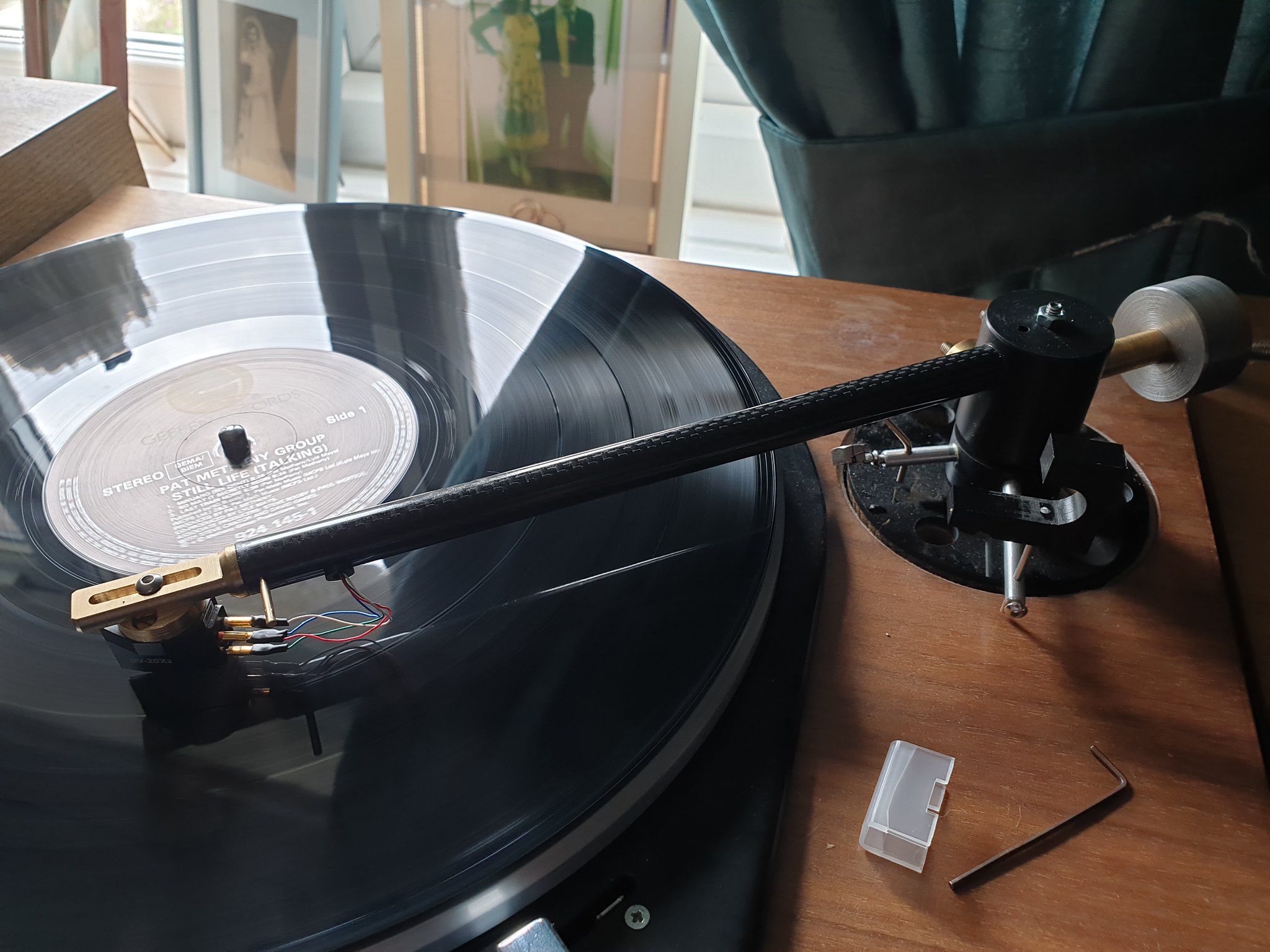 It's on test at the moment, initial thoughts are actually much more encouraging than I'd hoped.
The glaring problem of the top end seeming recessed seems to have been sorted, although my friend Simons observations on the tilted up bass end are abit more difficult to fathom. This was what he found with version 6, I sent the deck over to his for him to have a listen to it because I needed a second opinion on it and what it was doing. A completely different system, and a different perspective were needed to move forward

The bass seems 'better', not that there is more of it than I can remember, but more structured and tighter. Wether Simon would have to turn the bass amps down on his system again I don't know (he uses massive open baffles with separate amps for each section rather than one amp for the whole speaker), but my feeling is that the rest of the range is more in balance with it. I can't quite tell if the balance is completely right at that end as my big fanes start to roll off at about 45hz, and behave more like hugegreatenormous standmounts than Simons multi way system.

From the top, the cartridge mount is brass instead of aluminium, and is epoxied in place rather than being a tight interference fit.

The fingerlift is about half the length it was as I wanted less of the brass rod to be excited and vibrate along with whatever the cart is doing. Not so easy to use, but we shall see how much of a pain in the arse it becomes

It has been assembled in a jig I made for it this time instead of by eye, so everything is much better aligned

The counterweight stub is now also brass, as a result, the wand assembly is marginally heavier than it was

The bearing pillar is now much better made and is brass again, otherwise its design is the same as it was

There is no damping at all in the wand anymore

The arm rest is much more useable, if a bit clunky looking, that can be sorted whenever

So quite a few changes 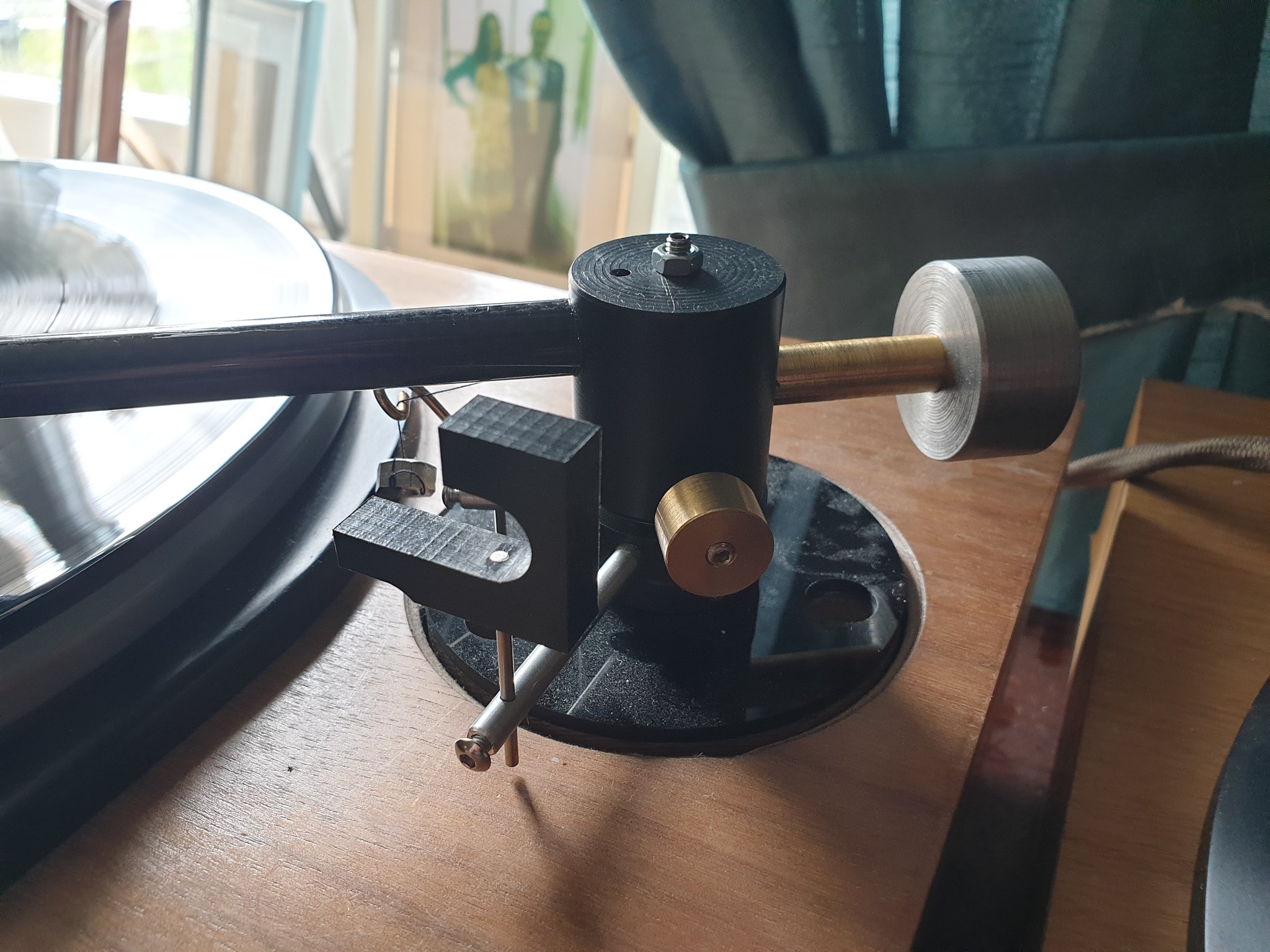 I do need to make a heavier counterweight as the current one is 115g and is hanging off the end of the stub, probably brass again as I don't want to end up with something substantially bigger. The calculated effective mass with an 8g cartridge is 12.6g, this will probably come down abit with a heavier counterweight closer in to the pivot point, I'd estimate it would come down to somewhere close to 11g.

The deck is taking a trip over to mi dads tomorrow, so we shall see what he thinks of it, and hopefully over to Simons again if he has the time to give it a listen. It was most instructive last time it went and definitely helped move the design forward.

I like the look of that, I am of the opinion that simple is best where arms are concerned and that is beginning to look elegant too.
Top

I am well impressed by your work. For me and my one arm , tonearms are im afraid out of the question

But very nice and satisfying work.

As always nice work Ant, guess No 8 will be even better

Did a little more work on the arm, made a heavier counterweight. I did try adding some lead to the existing one but it altered the mass distribution of the counterweight and did strange things to the lateral balance so i sacked that and did it properly with some more steel.

If anyone wants some stick on lead strip let me know, my father in law gave me 2 huge great rolls of it from when he was doing leaded windows. Theres about 5 kilos of it.....

The new one is 150g as opposed to 115g, and took an inordinate amount of time to make with the amount of times i took it out of the lathe chuck and weighed it, faced some more off it, and buggered about boring the centre hole to fit the stub.

Thats because id not used 10mm polished bar stock and had turned down what i had in to make the stub..

It will drop the effective mass a little to 11.5 g with the dv in it.

I have some more brass coming to make a smaller one of the same weight, id prefer it was more compact.

Havent listened to it yet, i dont think it will make a great deal of difference though, but it looks better not hanging off the end of the stub